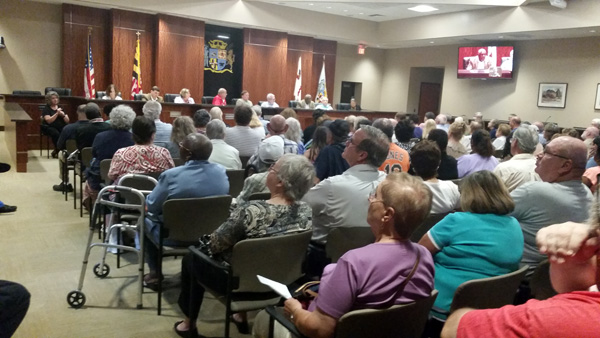 Laurel, MD — The Laurel Municipal Center was packed on August 10, 2015 as city residents and caregivers at Laurel Regional Hospital (LRH) attended a public forum, held by the office of Mayor Craig Moe, to express concern about Dimensions Health System’s plan to drastically downsize the hospital in the coming months.

The plan—announced on July 31 to the surprise of hospital workers, community members, local elected officials, and the Union—would transition the full-service hospital to a new $24 million ambulatory facility by 2018. The phases of the transition would put approximately 600 healthcare jobs on the line, eliminating critical services such as maternity and behavioral health departments and phasing out all but 30 medical/surgical beds in the process.

According to the press release issued July 31, the decision to close the hospital is due to decreasing admissions and financial losses.

Feedback from the community was overwhelmingly supportive of maintaining existing hospital services in the area. “Older people need 24-hour access and a full-service hospital,” said Audrey Binder, representing the retired community. “The Laurel area is growing, and we need hospital service to accommodate the growth we expect to experience.”

Other residents praised hospital caregivers, and plead with City Councilmembers, Mayor Moe, and State Senator Jim Rosapepe to fight to keep the facility open. “I have received superior care and treatment whenever I’ve come here,” said one resident. “The nurses, doctors and techs have always been kind and attentive…I hope my words will have some impact on the closure of this hospital.”

1199 represents approximately 350 registered nurses and service workers at the hospital, which employs over 650 healthcare workers. Union Vice President Pat Lippold expressed displeasure over the lack of transparency in the hospital system’s decision to close the facility, citing the facts that the Union was kept in the dark about the plan and has yet to receive requested information about the number of vacancies throughout the hospital system that could be filled with laid-off Laurel caregivers.

“The employment impact on this community will be great,” said Lippold. “There are a lot of unanswered questions.”

And Union members are asking many of those questions. Andrea Nagel, a labor and delivery nurse who has worked at LRH for 16 years, said that her colleagues are “taken aback.” If this plan proceeds, the maternity department is expected to be slashed before the end of the year.

“People are talking about it and wondering what our futures will be,” she said.