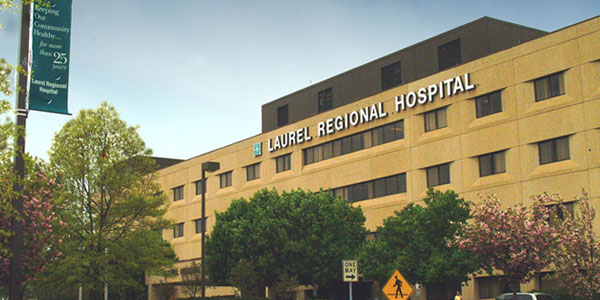 Claiming that Dimensions, the private operator of Laurel Regional Hospital, is in violation of a lease agreement and a resolution passed by Prince George's County Council, the lawsuit contends that the hospital's board cannot alone decide to eliminate beds or services at the facility. The plaintiffs, two Laurel residents and the Union of behalf of the workers it represents, say that they will suffer irreparable harm if the hospital closes. In July, Dimensions announced plans to close the hospital and reopen as a yet-unfunded $24 million ambulatory care center.

"I'm asking the court to stop the closure of Laurel Regional Hospital because the loss of their services would be devastating to me as well to my neighbors," said Paula Adams, a Laurel resident and a plaintiff in the suit. "I'm 81 years old and Laurel Regional is my medical home where I see my cardiologist and orthopedist. Our community needs the hospital. I don't know what I would do without the staff and services there."

"The decision to close this full service hospital is yet another failure of Dimensions executives to operate their facilities in an efficient manner," said Craig Moe, Mayor of Laurel. "It was made in closed door sessions with no community involvement and without discussions with local elected officials. I question why the Dimensions leadership failed to provide the public with full disclosure of the information contained in the consultant's scope of work."

The community served by Laurel Regional Hospital has already lost maternal and child health care -- Dimensions closed the unit and eliminated five beds on October 11, 2015. The operators plan to next eliminate 11 medical/surgical beds on November 7, 2015. The closest hospital, Doctor's Community Hospital in Lanham, is ten miles away from Laurel Regional but in the densely populated metropolitan region, it takes at least 20 minutes to reach, an eternity in an emergency. Washington Adventist Hospital, currently located in Takoma Park, has filed a certificate of need to relocate the bulk of their services to White Oak, approximately eight miles from Laurel Regional Hospital, but their first application, made in 2014, was denied. If approved, it would not open until at least 2018, leaving tens of thousands of residents without a local acute care hospital.

1199SEIU has also filed an unfair labor practice charge with the National Labor Relations Board, alleging that Dimensions "has failed and refused to provide requested information . . . pertaining to the closing of hospital units, reductions in force and layoffs of bargaining unit members at Laurel Regional Hospital." The Union alleges that this information is required by contract and needed for 1199 to adequately represent its members as they face losing their jobs.

1199SEIU represents more than 300 workers at the facilities; overall, 600 workers are expected to lose their jobs if the facility closes.